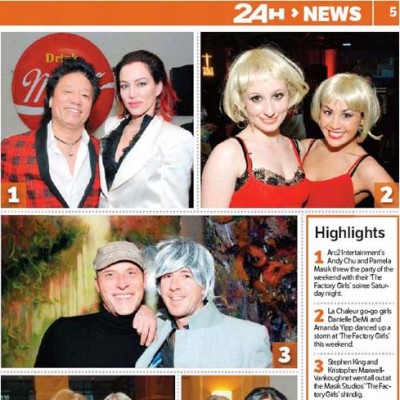 On Saturday night, Masik Studio’s impressive 14,000 square-foot space was transformed into an evening of film, music and live art performances one last time before the building’s slated demolition.

With the help of FMA Events and Maharaj Media, the studio became ‘The Factory,’ an Andy Warhol-themed soiree that brought out appreciators of avant-garde art and scenesters looking for their 15 minutes of fame.

While guests mingled and flirted in their 60’s-themed garb, female gymnasts suspended from the ceiling twirled their lithe bodies in long black ribbons and shimmy steel hula-hoops, and impossibly cute blonde-wigged go-go girls showed off their stamina and snappy choreography.

Later in the night, a live art display had big bouncers cordon off a wide arc as Masik and another dancer in a latex body suite writhed around in copious amounts of white paint then slid and swirled in violent passion on a black canvas wall.

Masik opens her new studio — Masik: The Factory — later in March. If art and history repeat themselves, it promises to be another place of bold artistic vision.